How to Think of Chicago “Think of Chicago as a piece of music, perhaps,” he continued. “In it you can hear the thousands of years of people living here and fishing and hunting, and then bullets and axes, and the whine of machinery, and the bellowing of cattle, and the shriek of railroads, and the thud of fists and staves and crowbars, and a hundred languages, a thousand dialects. And the murmur of the lake like a basso undertone. Ships and storms, snow and fire. To the north the vast dark forests, and everywhere else around the city rolling fields of farms, and all roads leading to Chicago, which rises from the plains like Oz, glowing with light and fire at night, drawing people to it from around the world. A roaring city, gunfire and applause and thunder. Gleaming but made of bone and stone. Bitter cold and melting hot and clotheslines hung in the alleys and porches like the webbing of countless spiders. A city without illusions but with vaulting imaginations and expectations. A city of burning energies on the shore of a huge northern sea. An American city, with all the violence and humor and grace and greed of this particular powerful adolescent country. Perhaps the American city—no other city in the nation is as big and central and grown up from the very soil. Chicago was never ruled by Spain or England or France or Russia or Texas, it shares no ocean with other countries, it is no mere regional captain, like Cincinnati or Nashville; it is itself, all brawn and greed and song, brilliant and venal, almost a small nation, sprawling and vulgar and foul and beautiful, cold and cruel and wonderful. Its music is the blues, of course. Sad and uplifting at once, elevating and haunting at the same time. You sing so that you do not weep. You have no choice but to sing. So you raise up your voice and sing of love and woe, and soon another voice joins in, and you sing together, for a while, for a time, perhaps a brief time, but perhaps not.…”

Chicago: A Novel by Brian Doyle 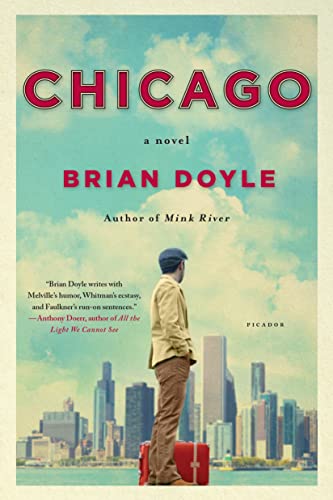